You’ll have to speak up!

I have of late noticed an increase in talk of lettering comics using standard sentence case instead of the traditional block capital style. On a purely emotional level, I’ve always objected to it without giving any real thought to articulating the reasons why.
I was recently asked to put together some lettering samples for a strip which included, by request, at least one style that was in standard sentence case. Both the writer and artist are creators I’ve known for many years, and whose work I admire enormously. For a nerve-wracking twenty-four hours they leaned towards choosing the sentence case lettering and, to my surprise, I found myself seriously considering removing myself from the project. To my relief, they chose another style in the end, but I had no idea until that point that I felt so strongly about the issue and was forced to think further about the whole matter so that I could articulate those feelings.
(To be clear: guys, this article is not aimed at you, but I am grateful to you for making me think about the issue. More broadly, I will be stating some arguments in favour of sentence case so that I can try to refute them. These are real arguments, but they have been relayed to me by third parties so I won’t attribute them because I can’t be certain that I have the quotation correct, even if I have the sense of it right. These are not “straw men” that I am erecting, nor are these windmills at which I am tilting.) 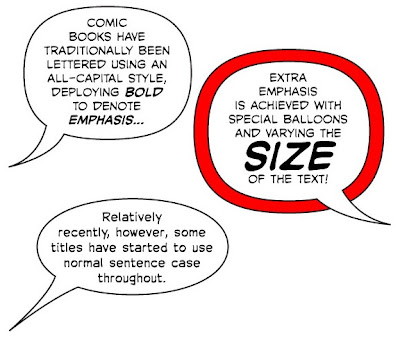 I’ve always had an instinctive dislike of this alternative lettering style, pre-dating my own professional involvement with comic lettering by a number of years. In fact, I think the first time I saw it was in Ultimate Spider-Man, and my eyes just kind of bounced off it -- I found it near-impossible to read.
Why? 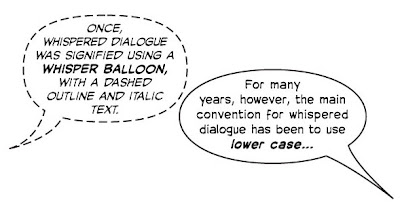 To me, it looked then and still looks now like everyone in the book is whispering. As such, it seems, to me, to suck all the drama out of the book. Don’t believe me? Try this:
I’m sorry, but that weedy little balloon completely fails to convey any sort of drama or emotion to me. If the lettering isn’t going to change its style to meet the dramatic needs of the scene or the individual panel, if the lettering isn’t going to interact with the visual element of the story-telling, then why bother lettering it at all?
Why not just have a picture and a chunk of prose underneath it, Rupert the Bear style?
So where does this break with previous lettering convention come from? I blame Neil Gaiman and Todd Klein!
Well, obviously, I don’t, but from the outside, looking in, this looks a lot like the same failure of imagination at an industry-wide level that said “Watchmen was grim and gritty and realistic and sold by the bucketload, let’s make all our comics grim and gritty and realistic so they sell by the bucketload, too!”
(Disclaimer: you know those straw men I said I wasn’t erecting? This next statement is one of those. I’ll try not to do it again.)
It looks like there’s an element of thinking “Sandman’s dialogue was in sentence case, and he was cool and edgy and literary and won loads of awards, so…” except, of course, that only Morpheus spoke in lower case, and his balloons were reversed out, so the character played on the whispering convention to turn his dialogue into an emphasized whisper. Having everyone do it achieves nothing.
Except make them all look like they’re whispering, of course.
So… on one level, sentence case dialogue usurps an existing convention to no good end, as far as I can see. Are we then to reintroduce the dashed balloon to indicate whispering? The recent attempts to use lighter grey text to achieve the whisper effect impact readability but, to me, fail entirely to look like whispered dialogue.


Indeed, the only other place a reader might have encountered normal text alongside greyed-out text is on drop-down menus in computer programmes. If the argument we're making about sentence case is related to broadening the appeal of comics to people who aren't necessarily familiar with the medium, the context of greyed-out text that they will bring is unhelpful, to say the least.
An argument that I have heard made is that upper case words are intrinsically harder to recognize than lower case, that the letterforms of lower case make it harder for younger readers to recognize individual words.
I have nothing much more to say on this, other then to observe that it didn’t seem to bother the young readers of the Beano in 1957:
Are we to argue that today's comic reader is less capable that the average eight-year old from fifty-three years ago?

In fact, I have never, ever heard that complaint made by a reader. Not once. Additionally, I letter for Classical Comics, whose award-winning adaptations of curriculum texts sell primarily into the education market and are specifically aimed at the less …enthusiastic reader. These are, without exception, lettered in standard upper case. So, we’ll hear no more of that one, eh?
Then there’s the issue of uniformity… a standard all-caps font uses the entire character set twice over, with the upper case letters being, obviously, upper case letters whilst the lower case letters are utilized to provide variant versions of the upper case letters. Additionally, ligatures (where placing two characters adjacent will cause the font to substitute for a third combined character) are used to keep double Os, Es, Ts, from looking obviously mechanical, as here, where typing double-T results in the merged-TT character:

Note also that I have used a capital E and a lower case E when typing this word, so that the two Es are also subtly different. Although no-one will ever notice this, it gives a subconscious cue to the reader that brings to mind the irregularity of hand lettering.
With a standard sentence case font, the upper case is used for upper case and the lower for, well, lower. Where are the variant characters? There aren’t any, so in terms of mimicking the oft-mourned age of hand lettering, using lower case fonts is a step backwards, because they look more mechanical than a well-crafted upper case font.
(That’s Blambot’s excellent HometownHero in the sample above.)
Finally, we come to the issue of space. 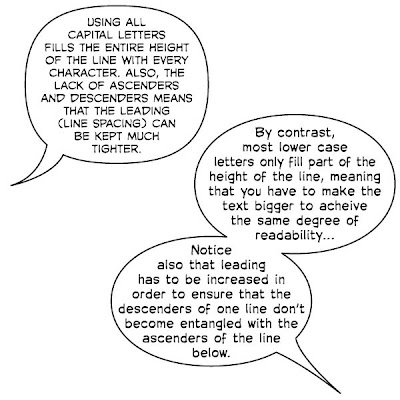 In other words, the text has to be made bigger because the characters are, effectively, smaller, whilst up to half the line height is empty space and the space between the lines has to be increased, too.
So, you end up covering more of the artwork with bigger balloons that actually contain more empty space.
Which kind of neatly dovetails into another argument I’ve heard advanced: that use of sentence case lettering calls to mind more European comics (which sort of bears out my theory about wanting comics to look more “grown up”, whatever that’s supposed to mean) and the European comic market is a lot healthier than the English-speaking one.
This is true, but overlooks the fact that European market is a very different one to the UK/US market and one conflates the two at one’s peril. The European market has always been a lot more laid back about what has lately become known as ‘decompression’, so covering more of the artwork with lettering is a relatively small issue, since one can simply use more pictures and thus more pages to tell the same story. Don’t get me wrong, I’ve admired long some of those large stylish, open balloons you see in many European books with no small amount of envy, but there’s no denying that it’s still empty space.
By contrast, the value proposition of comics, particularly in these economically trying times, is one that is very closely scrutinized in the English-reading world. Witness the suspicion with which DC’s announcement that 22-page comics retailing for $3.99 would drop to $2.99 but only have 20 story pages. Despite the fact that this represents a 25% price reduction for a 10% reduction in content, the move has by no means been universally well-received. Couple this with a fairly significant groundswell of opinion against decompression in general amongst fandom and I find it hard to make a convincing argument that “looking a bit more European” is going to be of any benefit to the industry simply by virtue of the fact that it’s aping a more successful market.
Japanese manga is an even bigger market than mainland Europe’s comic scene, so why not make everything look like manga?
So, after all that, what is the point of abandoning a decades old convention? To counter a complaint about readability that no-one actually has? To make comics seem more “grown up”? Again, I’d argue that if you’re going to make comics look less like comics, why bother making comics at all? Why not an illustrated novel? Why not the Rupert Bear example mentioned earlier?
And don’t get me started on sound effects… that’s a subject for another post.
_________________________________
Footnote: As I said previously, I was genuinely unprepared for how strongly I felt about this issue. I’m open to a good counter argument, if anyone has one or has come across one. Use the comments section to make it, or link to it if it’s elsewhere on teh interwebs. I am honestly interested in being convinced by the contrary position.
Posted by Jim Campbell at 08:47