This year's Eagle Award nominations close very soon. I may make the shortlist if you vote for me as 'Favourite Letterer" -- follow the link below, if you feel so inclined. All nominations gratefully received!


Click here…
Posted by Jim Campbell at 09:52 No comments:

For this post, I thought I'd take a quick look at one of the more involved lettering jobs I've been working on, the 'restoration' of classic 70s British comic strip Hook Jaw for the new Strip Magazine.

I remember Hook Jaw and the comic it appeared in -- Action -- from my childhood. As was the norm at the time, it was lettered using typeset Letterpress lettering, giving the lettering a very uniform and (frankly) boring appearance. When 2000AD appeared a couple of years later, editor Pat Mills had the whole thing produced with hand lettering, because he felt it looked more dynamic and exciting, and I had to agree. This practice then spread to other titles in the IPC stable and (although Action was long-gone by then) comics like Battle moved to hand lettering as well.
When Strip editor John Freeman announced that the new comic would be reprinting Hookjaw, I leapt at the chance to re-letter the strip. Much of the original artwork is long lost or possibly in the hands of private collectors, meaning that the only artwork available to use is scanned from the printed pages complete with the Letterpress lettering in place.
I felt that simply trying to drop new lettering over the old to cover up the previous balloons would be a less than ideal solution -- the new balloons might not be the same size, and some of the positioning (with the benefit of hindsight, obviously!) might not be ideal. John didn't take much convincing, and it was agreed that I would remove the old lettering digitally, and redraw the missing parts of the page so that we could approach the pages as if they were brand new pieces of artwork…
So, here's a quick breakdown of the process:
1) The pages are supplied to me electronically, courtesy of comic archivist Moose Harris (whose excellent sevenpennynightmare site can be found here)…
Moose has already done an excellent job of cleaning up the artwork during the scanning process and dropped out the original colouring.
2) I import the artwork into Manga Studio EX. Many comic artists work in Photoshop, but Manga Studio has (for my money) far better tools for simulating traditional inking techniques, making it perfect for this sort of work. If you look on the right hand side of the screen shot, you'll see that I've added two layers, "White" and "Black"…
3) Using one of the pen tools, I white out all the existing lettering. I try to remove as little of the surrounding artwork as possible -- I'm supposed to be restoring the original page, not showing off my own (limited!) drawing skills.
3) Occasionally using a bit of guess work to figure out what had originally been under the lettering, I move on to the black layer and, using a combination of Manga Studio's pen and brush tools, do my best to recreate the missing linework.
4) I then upload the artwork by FTP to the editorial server. The artwork then goes to the colourist (in this case, the very talented Gary Caldwell) and John Freeman reviews the script to provide me with a final lettering version.
5) The Gary provides the coloured version of the artwork…
6) Which I then place onto a lettering template in Adobe Illustrator, and letter in accordance with script…
…which then goes back to John for proofing, corrections and final approval. After that, it's ready to go in the comic!
Did I mention that this job is a whole lot of fun? I probably should -- a "Hook Jaw Day" might just be my favourite part of the month!
Cheers
Jim
Posted by Jim Campbell at 12:37 7 comments:

SOPA: off-topic, but too important to let pass…

The SOPA Bill fundamentally misunderstands how the internet works, panders to the interests of big business, is built on a systematic campaign of distortions, half-truths and outright lies spread by the entertainment industry and their lobbyists, and is just plain bad law.


And Rupert Murdoch supports it.


Although a piece of US legislation, it seeks to affect the whole world via the internet and thus is of legitimate concern to anyone with an internet connection. Thus far, the level of argument put forward in defence of SOPA is broadly equivalent to saying that if you oppose the death penalty, you must be pro-crime. This is patently nonsense, as is SOPA itself.


I can only urge American readers of this blog to lobby their elected representatives in the strongest possible terms. Again: this is bad law.

As part of my renewed determination to keep a regular update schedule, let's kick off with the much-delayed Part Two of my irregular series of articles focussing on the nuts 'n' bolts mechanics of making comics that so often seems to get overlooked. I'm sorry this stuff isn't sexy, but it is important.


Here's one that that's the bane of letterers and colourists everywhere, because they usually get lumbered with the job of fixing it…


Pencillers: learn the difference between Bleed, Trim and Live areas.


Honestly, it's not difficult -- half the time, I see the measurements printed on your artboard! Don't take it the wrong way if you don't know what these mean, though… as I said in my first piece on this subject, all this stuff should have been explained to you long before you got to the stage of making a professional comic page.


Most pre-ruled comic board will look something like this. 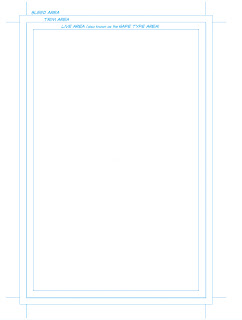 (By the way, the rules are printed in non-repro blue to make it easy to separate them from the pencils. If you scan the pencils in grayscale rather than RGB, someone has to manually remove them with the eraser tool!)


Perhaps it's better to back up a bit, and explain why these measurements are important…


A finished, printed US comic page is (more or less) 175mm x 267mm. This can vary a bit by publisher, and some Print On Demand (POD) services use a different page size, but this is pretty much close enough to the measurement of most published comics.


What this means is that the finished artwork will have been printed as spreads* onto pages that are oversized, cut down to the final size on a large guillotine, then mechanically folded and stapled to produce the finished comic. Perfect binding is a slightly different process, but makes no difference to the basic principles.


Here's the thing: if you've ever seen paper going through a press, it goes at a hell of a speed. Plus, it's having ink applied to it, which makes it wet, meaning that it can stretch slightly. All of which means that it moves about on the press while it's being printed.


If you -- the artist -- want a panel's artwork to extend right to the very edge of the page, then this means that you actually need it to bleed off. Because the guillotining process cannot be 100% accurate, you have to draw your artwork larger than the finished size and allow a margin of error.


This is why you have a Bleed and a Trim area marked on your artboard. The Trim area is completely irrelevant to the artist, to be honest, other than to understand that you can never, ever, end your artwork on that line, because it will either get chopped off in the finishing process, or you'll get left with a nasty white gap at the edge. 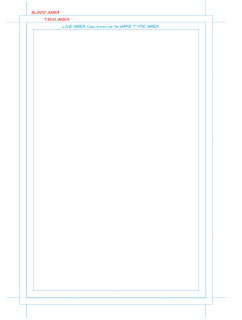 Consequently, anything that doesn't bleed off the edge of the page needs to allow an additional margin to ensure that it doesn't get cut off if the guillotine cuts in too far (once again, due to that movement on the press). That means panel borders, all the important parts of the action, especially characters' heads, any signage that needs to be readable, and all the lettering have to go inside this inner area, referred to as the Live or Safe Type area: 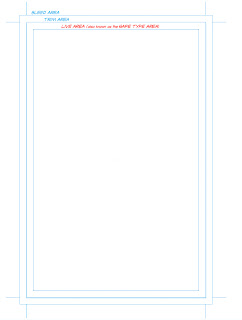 This last, the Live area, can vary widely dependent upon publishers' and printers' specs and I would urge any penciller taking on comic work that will be printed to check these three measurements with the editorial or production team.


As ever, feedback or questions are most welcome in either the comments section here, or on whichever forum you saw me plugging this blog!

Greetings From The Future! 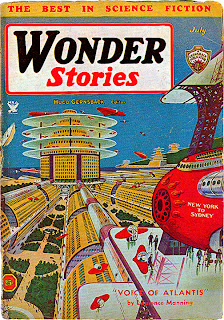 
No, it's no good -- no matter how many times I type that, it's going to look like the future to me!


I'll confess that this blog has -- regrettably -- been a victim of my own success. Checking back through my records, it seems that I've lettered 4124 pages in 2011, rather more than half of those in the last six months. That's amazing, and I'm grateful to every editor, writer or artist who's given me work or recommended me for a job during that period.


To everyone who's been wondering why the blog updates have been few and far between, this is the reason. To everyone who's had to wait longer that I would have liked for a response to an e-mail, this is the reason. To anyone who was expecting my contribution to the lettering talk at this year's Thought Bubble in Leeds, this is the reason! I can only apologize profusely, especially to Nic Wilkinson, who I left high and dry at the aforementioned talk, and to Ian Sharman who diligently stepped up in my last minute absence. All the feedback I've heard is that the talk went down really well, which is mildly deflating to my ego, but brilliant for everyone else concerned!


The first few months of 2012 (Ahh! The Future!) look a little calmer than the last few of 2011, so I'm going to try and hit a schedule of weekly updates for the foreseeable future, and maybe even get a few posts ahead of myself in case of the inevitable deadline crunch.


Here's hoping you all had a splendid Christmas and New Year, and that 2012 brings you good fortune and happiness.