Lettering In Adobe Illustrator: One

Explanatory note: about eighteen months ago, I made a number of posts to the 2000AD forum detailing the nuts and bolts of lettering comics using Adobe Illustrator, an exercise I thought was worthwhile since I had many years' experience using Illustrator in the design industry and knew that it was not always the most intuitive software package on the market. These posts were well received, and consequently I tidied them up and put them in a PDF for download, which has since also received much feedback, most of it gratifyingly positive.
My intention had long been to update it, and this is what the Illustrator Guide posts are intended to do. I've lettered a couple of thousand pages of comics since the original posts, had the privilege to hang out with, and listen to, the seasoned pros on the Digital Webbing Lettering Forum; and I just know more than I did back then. The old PDF is currently still available for download, but will be replaced by a compilation of these posts, which I will revise in light of any feedback received here.
So… let's get on with it!

Part One: Preparing Your Script

Before you can get to lettering anything, and before we get anywhere near firing up Illustrator, you’re going to need a script to work from. It’s a fairly safe bet that this is going to be e-mailed to you, and it’s likely to be a word-processing document; odds are, it’ll be a Microsoft Word document.

Occasionally, I’ve been sent PDFs, and even more occasionally a link to a page of HTML! Whatever it is, you need to get the text into a word processing document because the writer will have done a number of things which you, as a letterer, will wish that they hadn’t.

The big one is that they will, quite correctly, have used the capital letter I all over the place. This is a problem for you, because your font will render the capital I as a ‘crossbar’ I.

First of all ...crossbar 'I's — an illustration: 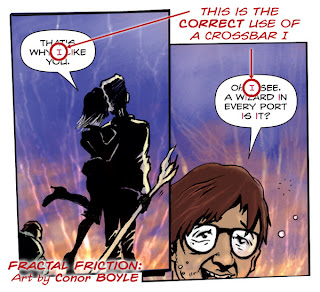 There is a school of thought that says it's also appropriate to use crossbar 'I's on the first letter of proper nouns (like Ian or Ingrid), with which I have no problem. Many lettering fonts also have a crossbar and a plain J, the crossbar J technically only being used on proper nouns as well: 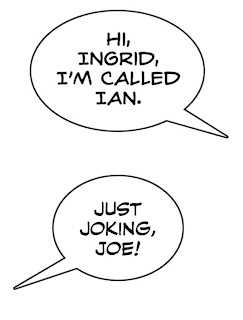 Some writers, since they are used to seeing their stories lettered in all caps, type their scripts accordingly:

Back in the old days of hand lettering, this made the script easier to read. Nowadays, the script is usually e-mailed to the letterer, pretty much always as a Word document, so that the letterer can copy and paste the text onto the Illustrator document.

Even if the writer has used standard sentence case, there will still be uppercase 'I's in the script where you -- as letterer -- don't want to use crossbars. For example, if a sentence begins "In another ..." you’ll get a crossbar I when it should be a plain one for lettering purposes.

There are several things a letterer needs to do to a script in Word before starting to transfer the text over to the actual lettering document.

If the script is ALL CAPS then the first thing is to go Edit -> Select All, then Format -> Change Case -> Sentence Case.

Next, you need to get rid of all sorts of typing quirks that may have crept in. Use Find/Replace under the edit menu.

Replace: _ Single Space (literally one space instead of the underscore)

Now, for those 'I's. You need to have Match Case selected to make this work.

Find: I (capital I, no spaces before or after)

Replace: i (lower case i, no spaces before or after)

Find: i_ (lower case i with space after)

Replace: I_ (uppercase with space after)

Find: i' (lower case i with apostrophe after, no spaces)

Replace: I' (uppercase I with apostrophe and no space)

Your script should now be broadly lettering friendly but you need keep an eye open for words that end in 'i', because you will have stuck a capital I at the end of 'taxi', for example. Likewise, some 'I's that should be crossbars won't be picked up by this. We haven't searched on 'i's followed by commas or question marks, so sentences like "I can't do that, can I?" or "I, Stupendo, command you to stand aside!" will have been missed. I found that replacing the comma and question mark 'i's gave me a crossbar where I didn't want one more often than not, but you may find otherwise.

Once you’re happy that you have a set of find/replace criteria that do the job for you. you could probably stick them all on a macro to save time.

(As an aside, when originally presented on the 2000AD forum, The Enigmatic Dr X suggested searching on _I_ with a space either side of the I, to avoid the taxI issue arising. On trying this, however, I discovered that a great many paragraphs start with the pronoun I and thus aren't preceded by a space. Sometimes they're preceded by a tab, sometimes by a hanging indent, sometimes by a hard return and sometimes by a soft one… in the long run, I found the process above to be simpler and faster.)

Also be aware that Word will substitute a double-dash for an em-hyphen. In British comics, the em-hyphen is preferred, but in the US, the double-dash is used exclusively. You can turn off the substitution in Word's Autocorrect options.

Finally, don't think that you can't EVER use a crossbar 'I' anywhere else -- it's fine as long as you're using it deliberately, and are trying to achieve a specific effect ... if you're going for an old-school Marvel Artie Simek/Joe Simon look, for example: 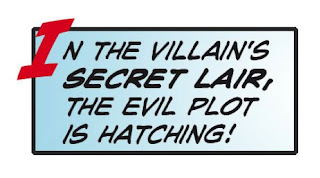 Finally, we should touch on the vexed area of sub-editing.

Technically, this is not your job as letterer. However, a badly punctuated script, or one riddled with typos will make your work look sloppy. Before you start work, check with your editor to make sure that they’re happy for you to do a little light subbing. If they say to leave the script alone, leave it the hell alone!

My rule of thumb is that I won’t re-write anything, so if a grammatical correction requires re-wording a sentence, I’ll flag it with the editor. I’ll fix obvious spelling errors, typos, missing commas and misplaced apostrophes without reference to the editor.

Note, however, that I do this on the lettering document rather than reviewing the script when it’s in a word processing format. Every line of dialogue is going to get my individual attention while I’m shaping the blocks of text, and I’ll check the spelling and grammar then.

Hopefully, you should now be ready to start the lettering process proper, which will lead us into Part Two of this guide.