Forgotten Wisdom (or: What Are They Teaching You Kids These Days?)… Part One

I don't think it's controversial to observe that the comic industry -- certainly in the English speaking world -- is a shadow of its former self. This isn't the place to talk about why that should be, but it's undeniable that there is just less money in the business than there was.


One upshot of this has been to squeeze the editorial side of the industry particularly hard. If it's not on the page, the bean-counters often argue, then it's not bringing value to the product, and the sometimes intangible value of the editorial department gets criminally overlooked.


Of course, this feeds back into the industry in ways that might not be instantly obvious, but which are unsurprising if one thinks about it for a moment.


One of the key areas where this becomes apparent is in the coaching of new talent. Once upon a time, editors would have assistants and art editors and the lead time on books was sufficient that great swathes of a book could be sent back to the artist for re-drawing; and artists learned their craft.


These days, not so much. Although it's true that almost no-one was ever employed out of the slush pile, the fact that larger publishers prefer to see published work from hopefuls, either via web-comics, small press or self-publishing, means that many artists will have substantial portfolios under their belts before ever receiving the first shred of editorial guidance.


And, as noted, with editors expected to turn round more books in less time with fewer staff than ever before, many editors simply don't have the time to sit down and produce detailed critiques of areas where artists (and writers, for that matter) could strengthen their work.


And in the process, some basic, fundamental truths of comic book storytelling get lost.


I thought it was worth a couple of posts to highlight some of these. If you recognize something I describe in your own work, I'm not criticizing you: comics are a collaborative medium and someone should have pointed this stuff out to you long, long ago. That no-one has, speaks only to the financial state of the industry at present.


So, let's start with something that was once on Page One of the metaphorical comic pencillers' handbook:


1: First Speaker On The Left


In any panel with multiple speakers, the first character to speak should be standing left of panel.


(Note: if your comic is not in a Western language that reads left-to-right and top-to-bottom then this rule, obviously, applies relative to the reading direction of the particular language!)


For all that comics try to appropriate storytelling techniques from visual media like television and film, the fact remains that the pages are still read, like any other written form, from left to right, and from top to bottom. This is the direction that the reader's eye will expect to travel and anything else will be counter-intuitive and disruptive to the reading experience.


In panels without much left-to-right travel, a letterer can get away with stacking the balloons vertically and the reader will follow without too much difficulty: 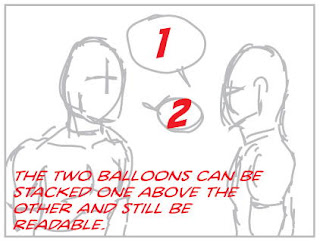 As soon as the panel becomes wide, then the reader's eye is primarily travelling left to right…

If the first speaker is on the left, all is well. The reader's eye will hit their dialogue first, then the character on the right second:

With the characters the other way round, we have a problem:

Of course, the artist's instinct is often to put something in all that dead space, which complicates matters still further!

So… comics read from left to right, and so should the panel layout.


However, we've also touched on another basic element of panel layout that is often overlooked.


I understand that an artist wants to feel like they're delivering value, and that fans can become quite vociferous if they feel that an artist is skimping on the backgrounds, but it is also true that right underneath "First Speaker On The Left" in that mythical handbook is "Allow 25-30% of each panel for lettering." 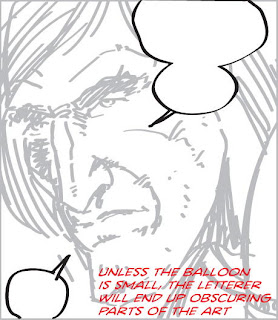 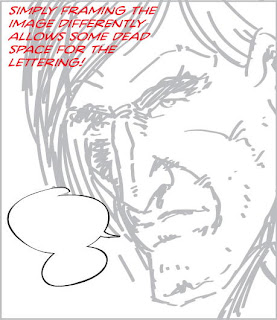 Feedback, thoughts and comment on any of the above is gratefully received.


Next time, I think we'll talk about those (apparently) mysterious markings on comic book art board, and the reason why they're in blue…