Still pretty busy, to be honest (not that I'm complaining, I should stress) but there's enough time to mop up a couple of questions from previous posts' Comments sections, which is what these 'surgeries' are for.


Where does default lie?
Jesse asks:
"Is there a way to lock Illustrator's ellipses at 0.75 pt? Mine (CS1) defaults to 1pt, which looks too chubby to my eyes, but it's a pain to change each balloon. I've considered creating the page at 1 pt, then selecting the Balloons layer and changing it all to 0.75 pt when it's done, but I think that may end up introducing side-effect oddities where balloons don't look quite right after I change the stroke width."
To the best of my knowledge, there's no way to set the default value in Illustrator.
However, I really only have one basic dialogue balloon for most projects. A not-quite-oval one or a slightly-squared-off one. Some fonts and projects suit one style better and some suit the other -- I don't tend to mix them.
Consequently, I have one balloon with the correct stroke, fill and trapping values to one side of the document on the Balloon layer. When I want a new balloon, I simply CMD-C/CMD-V or hold down the ALT key and drag the balloon onto the document area with the Selection tool. Using ALT turns the normal move operation into a copy.
As long as you have the "Scale Strokes" option unchecked in Preferences, you can then resize the balloon to your needs: 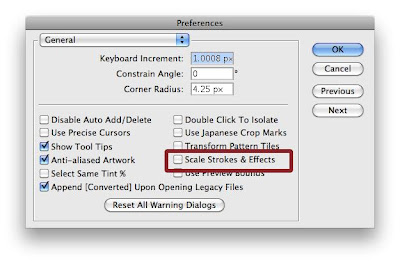 If you want to create a different balloon or caption box with those values, simply click on the master balloon with one of the selection tools (doesn't matter which) and then switch to whichever drawing tool you need. The next object you create should be on the same layer and have the same stroke and fill values.
If you find that having a live object at the side of the page gets in the way, you can always lock it (CMD-2) so that it can't be accidentally selected, and then pick up its properties with the eye-dropper (quick-key 'I'). I've never used CS1, but if it has Graphic Styles, you could also create one with your basic balloon properties and use the Styles palette to quickly apply the relevant values.

Kyle Jones came back with a quick follow-up question arising from my 'Resolution' post:


"... Do you ink on a vector layer or a raster layer in Manga Studio. I realize you'd still have to use the bucket tool and some other things on a raster layer (even if inking with vector layers)? Do you do this (inking on vectors) in case you want to make characters or objects bigger as you adjust your drawings?"


I use raster (bitmap) layers for all my Manga Studio layout, pencilling and inking. I'll confess that this is largely because I haven't yet got to grips with the vector features of MS yet, but also because I had previously tried inking in Illustrator and literally never found myself going back and editing individual strokes, only ever deleting them. Given this, the very generous number of Undos available in MS seems more than sufficient.


You're quite right to observe that scaling elements on a vector layer will give better results than a raster one, but I try to do anything like that at the "pencilling" stage so that the inks are all laid down at the same size.


Nonetheless, the vector tools are still something I intend to get to grips with, and I promise a post on that subject once I have!


"Also, what would be the precise specs you'd recommend when building a standard US comic book page in Manga Studio (for Page Size, Finished Frame, Basic Frame and Bleed Width) as it seems different comic company's specs vary slightly, what would be a good generic template?"


Again, I've never used MS professionally for a page of comic art, but this is my understanding…


Finish Frame is the same as the Page Size, in as much as it is the finished, trimmed size of the page. A standard US comic book is 168x259mm, so that's the size I'd use for my Finish Frame; Bleed varies by printer but no-one ever complained about having too much, so make that 5mm on each edge, to give 178x269mm.


Basic Frame is the Live/Safe Type area. This is the one that can really vary, so for a paying job always, always check! For practise documents, you might as well call it 10mm in from the finish frame, so 148x239mm…


As ever, if anything here is unclear, or gives rise to further questions, please feel free to use the Comments section to post queries or give feedback.
Posted by Jim Campbell at 15:22