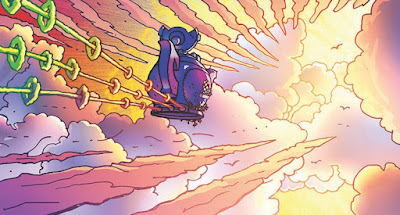 Very shortly after 2019's excellent Thought Bubble convention, I received The Call from none other than Tharg the Mighty who, as I'm sure you know, is the alien editor of 2000AD, the Galaxy's Greatest Comic. More accurately, he tasked his human assistant, Matt Smith (longest-serving holder of this thankless role) to invite me to join the lettering team on 2000AD.

Under normal circumstances, this would have been a cause for much rejoicing — I've been a reader and fan of 2000AD since 1979 and have had the pleasure of doing some non-2000AD work for publishers, Rebellion. However, this came as a result of the sad news that one of the regular team, Ellie de Ville was seriously ill. Tragically, Ellie died a few weeks later. Although I never met her, her work has been a constant through 2000AD and many other UK comics of yesteryear for decades and her untimely passing was a sad loss and, I'm sure, a terrible blow to her family and many friends. You can read a short selection of tributes here.

That made my addition to the lettering roster the first change in 2000AD's line-up of letterers since the death of Tom Frame, back in 2006, which is certainly a testament to both the loyalty felt towards the comic, and extended back to its contributors.

All of which made picking up that baton a strange and sad thing. Over in the Judge Dredd Megazine, I was asked to take over lettering a fan-favourite strip, the entirely brilliant 'Lawless' by Dan Abnett and Phil Winslade. Given that these episodes are likely to end up in a collected edition at some point, alongside pages that Ellie lettered, I could do no more than find a lettering style that would jar as little as possible for the transition.


There are already two collected editions of the series, which I would urge you to check out: Volume One and Volume Two. If you like a science fiction Western (and who doesn't?) this is going to be right up your street.

Meanwhile, I was also asked to letter two strips for 2000AD's bumper end-of-year edition for 2019. One was a (sort of festive!) one-off Durham Red story by Alec Worley and Ben Wilsher.


The other was a new series, a sequel to 2012's Zaucer of Zilk by Al Ewing and Brendan McCarthy, continuing with Peter (Resident Alien) Hogan taking over co-writing duties and Len O'Grady sharing colouring.

Brendan is possibly best known outside UK comics for the career he took up in the late 80s and early 90s as a designer and storyboarder for film and TV, and perhaps most famously as co-writer of Mad Max: Fury Road.

UK comic fans of a certain age will be familiar with his work going back to the early days of 2000AD where his bold, graphic style and phenomenal use of colour warped many a fragile little mind. 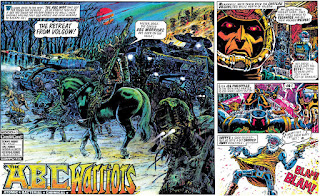 Even though 2000AD has never had a 'house style' and is always home to an amazing range of artists' styles, it was fairly obvious from the outset that the new series of Zaucer wasn't going to look like anything else in the prog, and with a series that I can only really describe as the bastard offspring of Dr Strange and Yellow Submarine, wasn't going to read like anything else either… so I decided that maybe the lettering ought to catch a little of that whimsy, too.

I quickly settled on Comicraft's CCMoritat for the dialogue — it has lots of character, is still legible and, if you run it with the horizontal scale up a touch, it reminds me a lot of the wonderful Steve Parkhouse's hand-lettering… 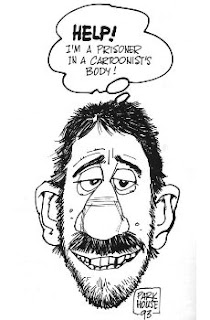 Using balloon shapes drawn 'by hand' (albeit digitally) that referenced the many years of classic hand-lettering for 2000AD, I came up with a lettering style that I hoped hit the mark…


Matt Smith showed my sample page to the Mighty One, and, to my relief, he liked it. In fact, he even commented that the style reminded him of Steve Parkhouse's hand-lettering… so that was job done!

And I'm having a great time working on the series. Peter has kindly brought back the desperately unfashionable thought balloon, which is a device I've missed terribly and rarely get to letter outside Garfield books:

I've enjoyed trying to integrate the lettering into the art where I can, rather than just letting all the lettering float on top of the art… even if it's just a little overlap, as with the first panel below, where the Tailor's hat and a tiny bird overlap the caption. 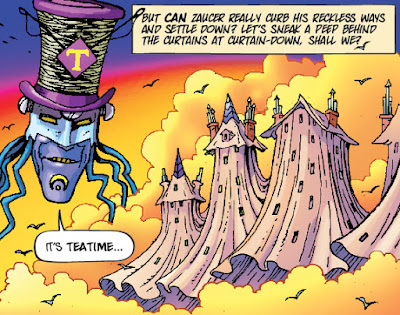 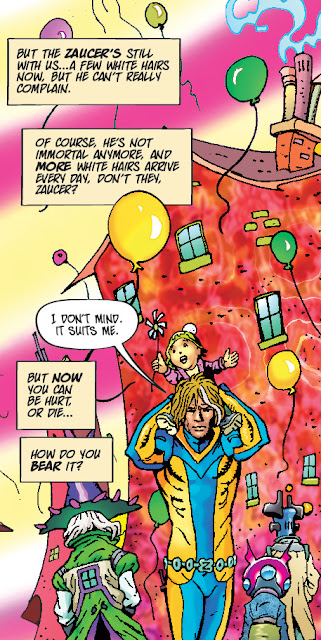 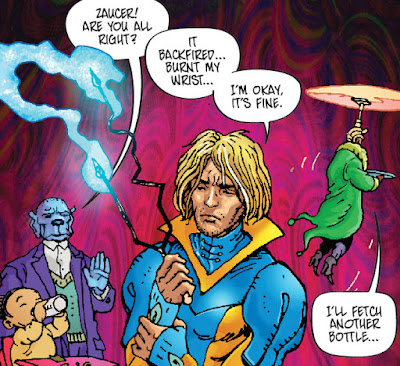 I also know that Brendan has said in the past that he's not much enamoured of digital lettering, which was another reason I wanted to bring a little extra character to the strip's lettering. Plus, y'know, Brendan's a mad genius.

Sadly, almost no publisher will sign off on hand-lettering dialogue these days — it's slow (and more expensive than digital because a letterer needs to charge extra to reflect the additional time spent on the pages) and makes doing both corrections and repurposing lettering for translated editions much more difficult.

However, there are relatively few sound effects in Zaucer, so I thought I might be able to spend a bit of extra time on those, and draw them by hand — creating them in Photoshop on new layers over the artwork for reference using a Cintiq, and then bringing them into Illustrator and converting them to vectors.

(I'll confess that Photoshop isn't my first choice for drawing anything, but the workflow is easy — simply collapse any layers with elements you want to bring into Illustrator, draw a selection marquee over the sound effect and you can just drag and drop from Photoshop onto your Illustrator page. Once there, Illustrator's Image Trace will vectorise the effect in moments.) 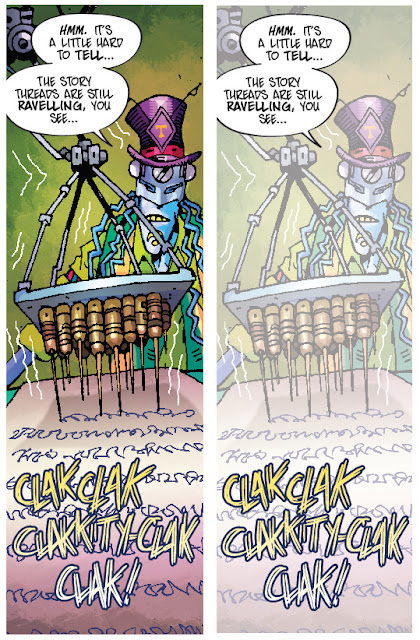 With a little bit of care, it's even possible to try and combine them into the art. I've seen plenty of Brendan's hand-drawn sound effects, and I wouldn't try to pretend that mine look half as good, but I was quite pleased with the way this one, in particular, combined with Brendan and Len's lovely work. 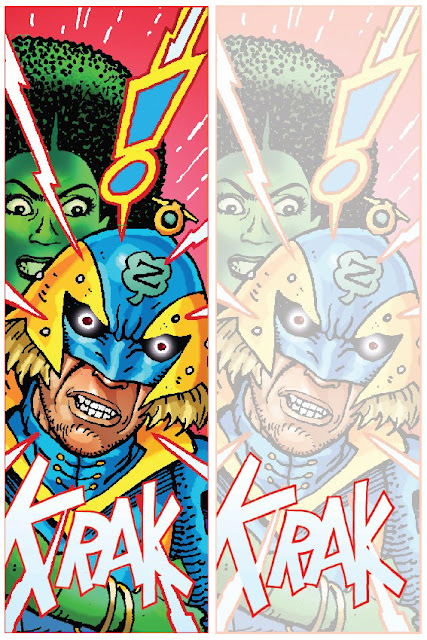 And that's it. A quick look behind the curtain(down)…I hope you're having as much fun reading the strip as I'm having working on it.
Posted by Jim Campbell at 19:23 No comments: